Skip to content
I had an absolute treat today. I spent the afternoon with the dynamic, enthusiastic Carl Gauntlett from Just Catering, learning how to make a professional curry base sauce.
Carl has decades of experience with cooking, feeding and catering for folks around the West Midlands. A prolific food enthusiast he once spent an afternoon learning the tricks Indian restaurants use to perfect his curry dishes. He is regularly booked to cook and serve curries to all sorts of clients around Birmingham and it the CEO and chief technician for Just Catering.
We met up in his home in south Birmingham one gloomy stormy Friday afternoon as he took me through the basic process. In contrast to the weather, Carl was chipper, chatty and eager to share his method with me. The passion he has for his food certainly came through as the afternoon progressed. You can watch him teach me how to cook a professional curry base here.
Watching Carl cook and talking through his process, you are really struck by how incredibly knowledgable he is about the process. Not only does he know what ingredients and cooking method will bring out the best flavour, he really understands how to cook en masse for a large group. Even little details such as which type of bowls allowed large quantities of mixture to cool down fastest were explained; he justified every decision and step he makes. It was clear a lot of research and development had gone into his method; he was almost scientific in its approach and attention to detail.
So, what follows is a description of Carl’s lesson, with his main cheats highlighted. But to get the full experience, make sure you watch his video on our facebook page.

I never knew this, but restaurants actually do most of their cooking before the customers are in the building. Most tomato based curries can be made using one standard base sauce. You then add ingredients such as meat, vegetables and additional spices to alter the end result. For Just Catering’s clients, Carl makes huge vats of base sauce, portions it up, and freezes it to use later on. A base sauce will keep for at least a month in the freezer. You simply take out a portion when needed and defrost before use.

To begin with, Carl got out two large stainless steal saucepans. He chopped up six large Spanish onions into small chunks. Sunflower oil was heated up in one pan and the onions added. Carl allowed them to sweat down. He added a desert spoon of salt. This stops the onions from sticking to the side of the pan and added flavour to the dish.

Once the onions had softened, Carl added minced garlic and minced ginger. Carl explained that he bought his garlic and ginger pre-minced. Not only does it save you time, but it reduces the amount of “scum” you get on the top of the base sauce later on in the process. This in turn meant base sauces could be made faster with less effort.
Once the onions were nicely soft, Carl added water to the pan and left the mixture to come to the boil. The two stage process of sweating and then boiling the onions really is the key to bringing out all the flavour you can.
In the empty pan, Carl poured in a few tablespoons of sunflower oil and heated it through. Once it was hot, but not sizzling, he removed it from the heat. This was crucial, he explained. If you add the spices into boiling oil or add too much heat, the spices will turn really bitter and the flavour will be ruined. The spices were cooked off in the pan for a few minutes.

The blender is your friend! A large tin of chopped tomatoes was produced and poured into a blender. It was blended until really smooth and then poured into the other stainless steal pan. Although you could potentially cook the onions and tomatoes together, Carl recommends his method of cooking them separately and then adding them together. It really improves the finished flavour.
The blended tomato, along with tomato purée was added to the pan with the cooked spices. It was all mixed together and then left to simmer for about 20 minutes.

Once the onion mixture had come to the boil and the onions were nicely softened and translucent, Carl transferred the mixture to two large blenders using a jug. He brought the blender canister to the pan of onions, to reduce the chance of scolding. Normally, he explained, he would allow the mixture to cool at this point, as it can damage your blender if it is too hot. However, he thought it was important that I saw the whole process.
Once blended, the mixture was poured into large bowls to finish its cooling process.

Switching back to focus on the tomato sauce, Carl used a tablespoon to remove some of the scum that had gathered on the top during the simmering process. It was vital, he said, otherwise the sauce would have an unpleasant look and texture.
At this point, the onion mixture was added to the tomatoes. The whole dish changed colour from rich red to creamy red. It was allowed to simmer (not boil) for ten minutes or so until more impurities showed on the surface. Carl then removed them with a spoon.
And that was it! The sauce was ready. At this point, Carl told me, you can allow the sauce to cool down, portion it up into plastic tubs or freezer bags and store in the freezer until needed.

My takeaway from Carl’s lesson.

I would definitely follow Carl’s method from now on. He was clear, precise and after tasting the end result (yes, one of the perks of this job is that I get to take home large samples of the product) you can definitely taste the difference. I loved his idea to cook up a large batch for using later.
Carl’s base sauce is used in all his tomato-based curries for Just Catering clients. They are handmade, from scratch, using the highest quality ingredients. For a business or private event with a difference, use Just Catering to wow your guests with Carl’s amazing curries. 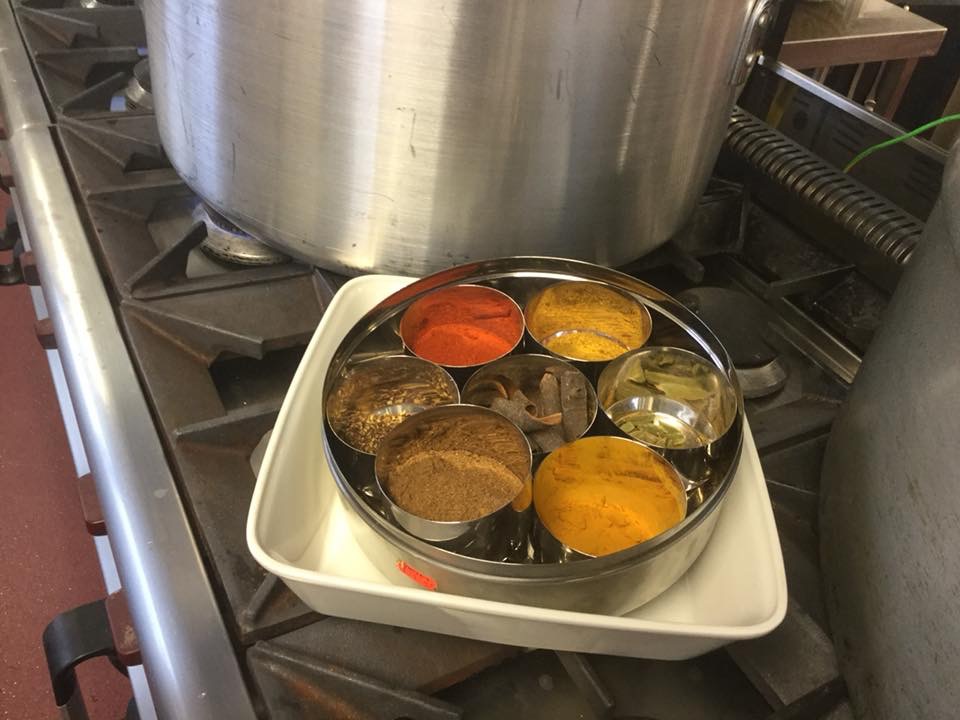