A recent poll said that by the end of 2019, over 600,000 people in the UK were following a vegan diet (source: https://www.vegansociety.com/news/media/statistics). What with concerns over the impact of the beef industry on the environment, worries about the sustainability of a heavy meat based diet and general animal welfare concerns, more people than ever are giving serious thought as to whether they should switch to veganism. 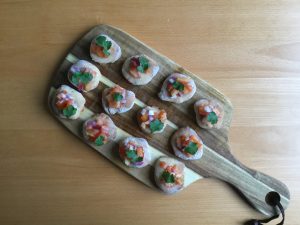 To take a few examples at how much awareness of veganism and the issues driving its increase is increasing, just this week, at my local supermarket, I was struck by the new range of vegan friendly meals that were available in the frozen section. In the entertainment world on Monday, this year’s Oscars luncheon served vegan food to the world’s A-list celebrities and movie stars (source: https://www.bbc.co.uk/news/entertainment-arts-51265191). Apparently it consisted of a sit-down meal of vegan cheese, a beets-and-citrus salad as the starter, roasted maitake mushrooms, winter squash, cauliflower and forbidden black rice!

Myself, I certainly have reflected on our family’s diet over the last few months and changed to include less meat (especially red meat), more fish and more vegetarian meals. I am incredibly fortunate that my family are very willing to try new dishes. It also, really helps us keep within our monthly budget.

I have cooked and catered for vegetarians personally in the past, but never for vegans. So, having seen the recent trends towards this lifestyle choice, I decided to investigate how I would put on a wholly vegan canapé event in honour of Hollywood’s award season! (Yes, I am imagining myself walking down a red carpet posing for journalists right now).

How to make a vegan base for your canapés.

Firstly, after a quick internet search, it really struck me how many mass produced canapé products (such as pre-bought blinis) include ingredients such as egg yokes and milk that cannot be consumed by vegans. I could find ready-made vegan canapés in some of the high end supermarkets, but no ready-to-fill vegan blinis or vol-au-vents). There were plenty of vegan pastry, blini and bread recipes. Some of them looked a little complicated for my beginner cooking skills.

My imaginary vegan based Hollywood awards night is going to need to cater for a large group of people, so I decided to simplify things by creating one canapé base that can have many different types of filling added to it.

A lot of the canapés Just Catering serve are presented on a blini or bruschetta base, so I thought I would start by creating a pizza base. This would have no eggs or milk in. I actually used my bread maker at this point, I’m not going to lie. I made a huge batch of pizza dough so I could have many failed attempts if needed.

The dough was chopped into small pieces and rolled into tiny mini pizza shapes ready for baking. They were in the oven for 15 minutes on 220 degrees C. 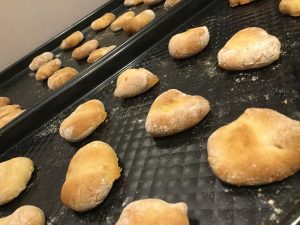 My mini pizza bread blinis, fresh out of the oven.

How to make a vegan filling for your canapés.

Ultimately, the pizza bases were ready to be used as a base for any vegan filling. Aiming to follow Just Catering’s canapé menu as closely as possible, I aimed to create canapé fillings that were loosely based on our menus.

The first one was a traditional tomato salsa, with red onion. I chopped up the red onion and tomatoes into small cubes and added a little dash of lemon juice. Then I added a little white wine vinegar and a crushed garlic clove. 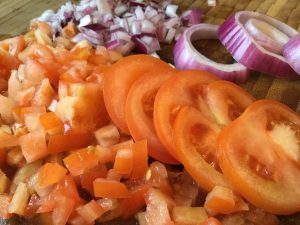 I did my best to chop the pieces as small as possible. It was easier chopping the tomatoes into slices and then cubing them.

Once the mixture was ready I scooped a tea spoon of the mixture onto the vegan “pizza blini”. Then I added a coriander sprig as a flourish.

This was more of an assembly than a recipe. I spread tomato purée onto the vegan pizza blinis and added some marinated peppers from a jar. I then sprinkled with vegan cheese. These could be grilled slightly just before the vent and presented hot to your guests. 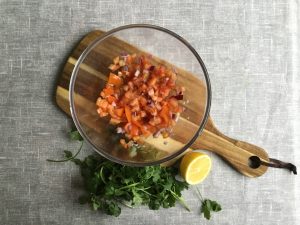 My tomato salsa mixture, ready for adding to the canapés.

I sliced up some onions as finely as I could and cooked them in a saucepan with a knob of butter and a little water. Making sure I kept the heat low, I stirred regularly to ensure it didn’t burn or over heat. 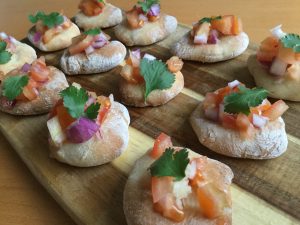 The tomato salsa pizza bread based blinis with tomato and red onion salsa.

Once the onions were almost cooked, I added a tablespoon of soft brown sugar (muscovado sugar would work too) and a tablespoon of balsamic vinegar. This creates a soft gooey flavour. I cooked the onions in these flavours until they were lovely and golden.

I think that one of the major barriers to more people eating a vegan diet, either partially or fully, is the fear that the taste of the food isn’t going to be as good as meat based products. I have always been a strong believer that vegetables should taste as good as they possibly can when you serve them; if you can make the veggie fillings as tasty as possible, you should be able to persuade people that the food is good. It’s certainly helped me persuade my children that vegetables are something to look forward to, not just put up with. My blog post How to stop vegetables from being boring covers some of these techniques. So, would my attempt at creating tasty vegan canapés go down well with the most discerning of consumers, namely my husband?

Ultimately, my family had no idea that these products were vegan. I had the thumbs up for all three recipes. All agreed that they were very tasty. The caramelised onion, in particular, was really well received. The kids did manage to lose a lot of filling by tipping the pizza blini though!

What I liked about this attempt at vegan canapés was that, as a vegan novice, I didn’t have to source more niche diary alternatives such as aquafaba for the pizza blini recipe. I felt that this was a good first step in my march towards a more varied and a balanced diet.

Practically, the vegan pizza base would work for vegan and non-vegan diets. You could bake a batch lot of the pizza blinis and then create different toppings to suit different guests. You would be needing to source different blini bases on top of additional fillings. If you used gluten free flour, you could also potential make them suitable for almost all dietary requirements.

So, whatever your dietary requirements, just contact Just Catering for bespoke luxury canapés. We can let you know our menu range, chat about how to customise your food for your event, and help create amazing memories for you and your guests. 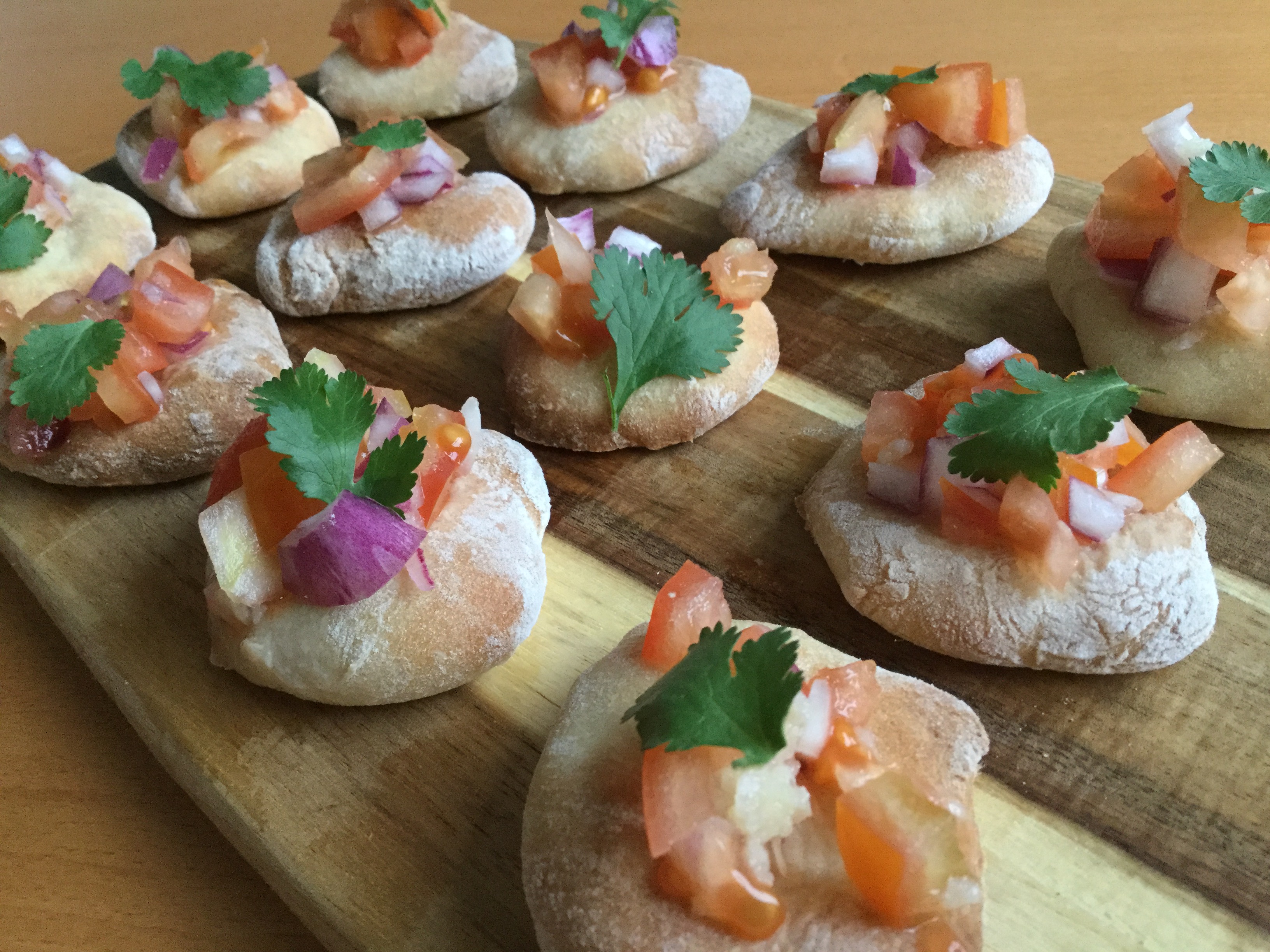